Whoa..! Here is an Plane alternation for "Flygskam" people..! An innovation in Shinkansen filled with Cutting-Edge Technology which is going to be one of the biggest recognition for Japan

The Shinkansen (新幹線) means “new trunk line'' commonly called as the Bullet Train is a network of high-speed railway lines in Japan operated by Japan Railways (JR) departed from Tokyo station ran lightly over the elevated lines towards Shin-Osaka in the early morning of 1st October 1964 and impressed the world in the 1964 Olympics. 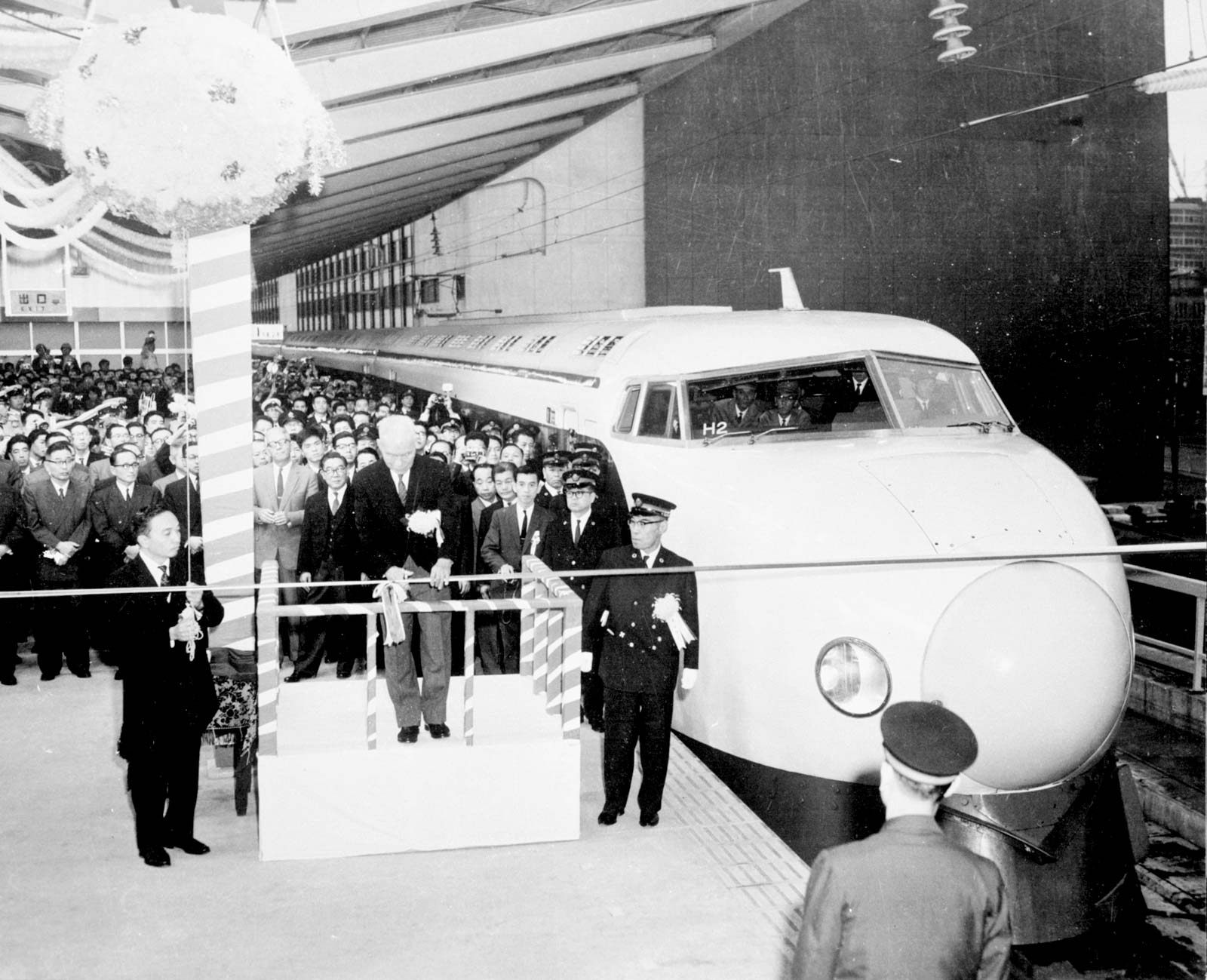 Thereafter the Shinkansen era has started and become a recognition for Japan after World War II and considered as the “Wonder of Science and Technology”. 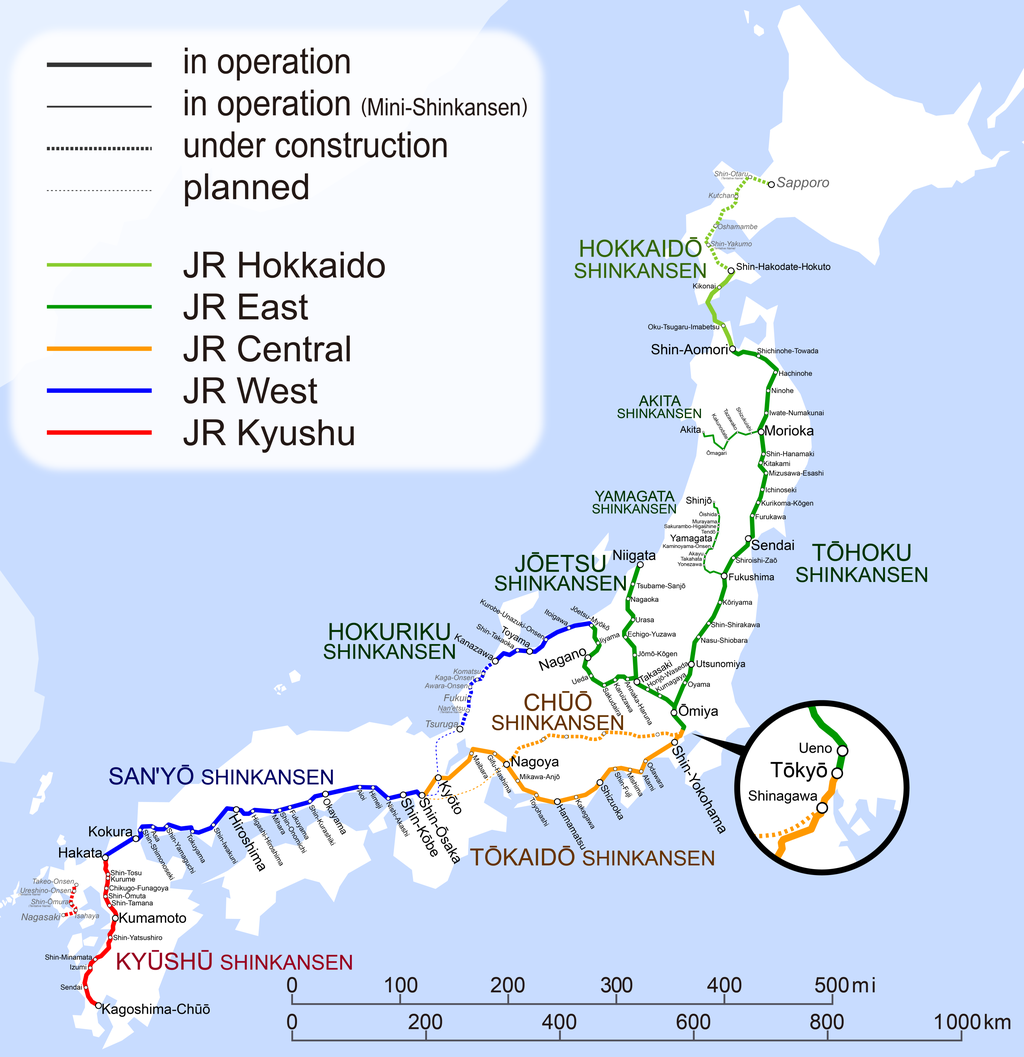 More than 50 years passed since and carrying over 10 Billion passengers and not even a single passenger fatality or injury due to train accidents. Japan is still leading the world in railway technology. Every year Japanese powerful conglomerates such as Hitachi and Toshiba export billions of dollars of vehicles and equipment to countries around the world. The ALFA X is a next generation shinkansen developed by Japan railway (JR) East and colloquially called as Future Shinkansen.  The ALFA X is abbreviation of "Advanced Labs for Frontline Activity in rail eXperimentation" meaning that an advanced car for conducting cutting-edge experiments. The ALFA X is expected to start operation around 2030 and will run at speed up to 360 kph, thus earning the title of World’s fastest bullet train. The tests are being done the cities of Aomori and Sendai, twice a week after midnight with the travel distance of 280kms. 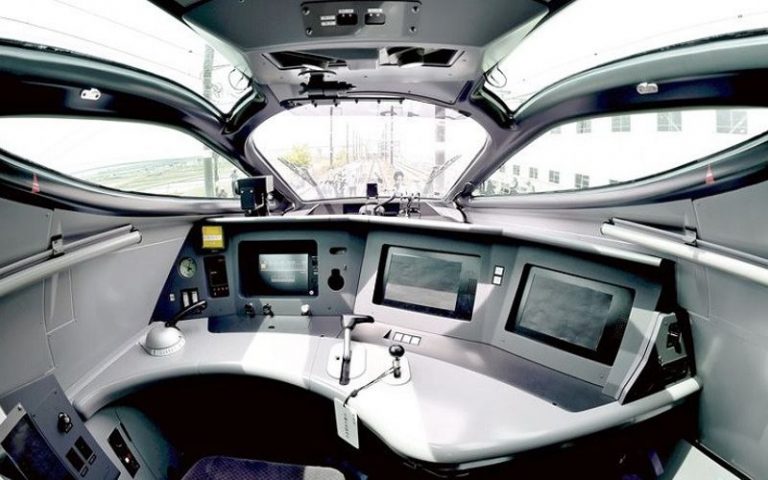 It is comprises of term plan  medium and long for developing technologically.

The four development concepts are

“Enhancement of more Safety and Stability” 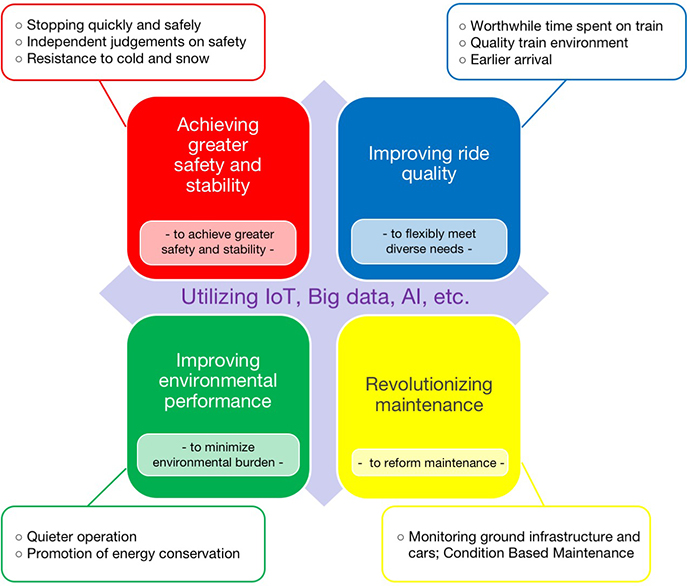 Enhancement of Safety and Stability

The ALFA X will be equipped with "earthquake countermeasure dampers and crushable stoppers" that reduces the judder of vehicle at the time of an earthquake, and holds the train on the rail. Safety judgment taken independently, a body structure that resist the snow and producing a bullet train that is adhere to snow and cold. Stopping safely and quickly, said research team.

The installation of a vibration control prevention device and the structure of the vehicle body with high sound absorption and sound insulation are the tests conducted by team, The motive is to make "a car that makes you feel like as if you were in office or at office when travelling. Early arrival is considered as important factor to Improve ride quality.

For the vehicle’s lower part of the body, reducing the aerodynamic noise by developing a back surface shape of the disc which generated with the help of the brake disc rotation. 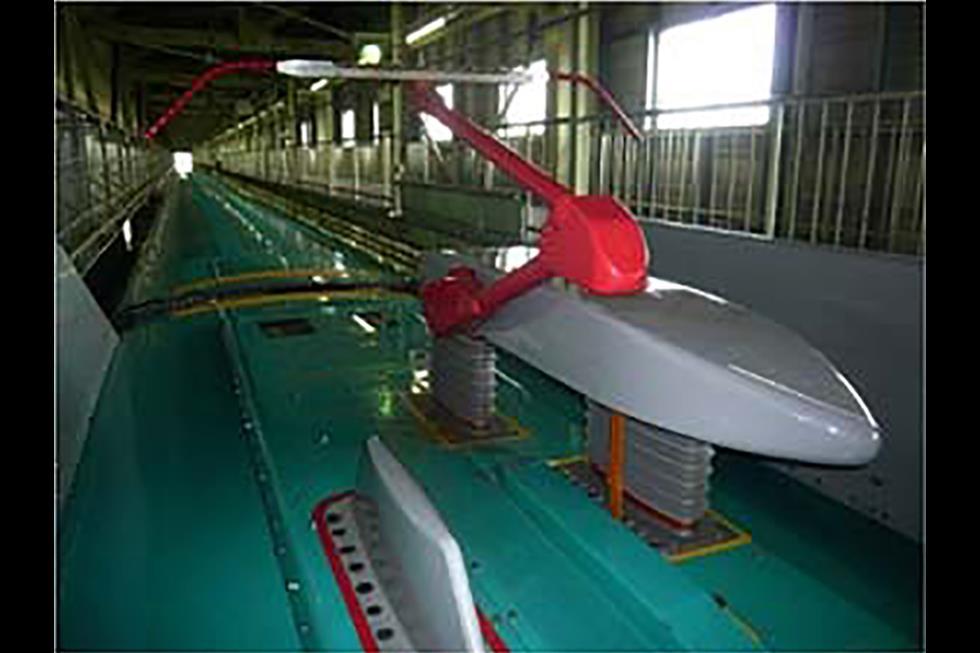 To make use of simulations and wind tunnel tests by a new pantograph that can reduce aerodynamic noise. With this, improvement of the environmental performance of the development concept can be obtained.

In the development concept of “maintenance innovation”, the company aims to provide new value in addition to the safe and high-speed transportation means that have been provided by the next-generation Shinkansen. By monitoring ground infrastructure and cars and condition based maintenance are the major ideas of innovation in maintenance concept.

The ALFA X is incorporated with two new nose designs aiming to reduce micro-pressure waves generated when entering and exiting the tunnels at very high speeds. The Car 1 will have a similar nose to the series E5 but with a meter more length from 15 to 16 m. 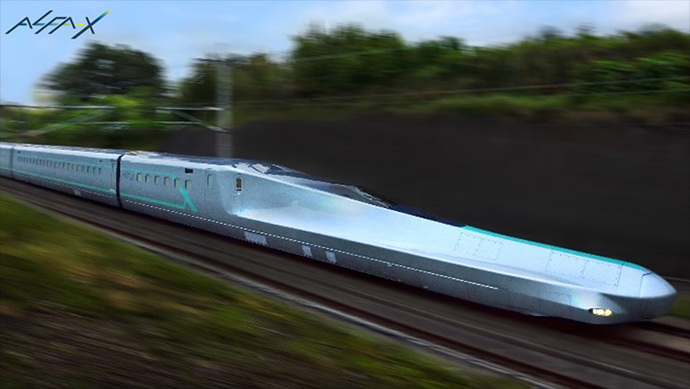 Car 10 will have a 22 m nose with a more complex shape and structure, with much reduced interior space. To improve environmental performance further, tests will be undertaken with two designs of low-noise pantographs. 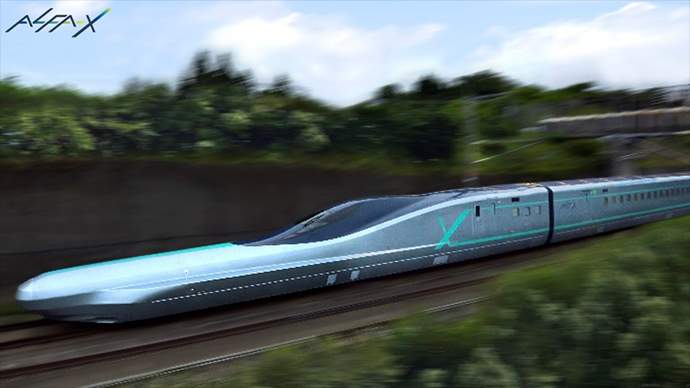 Improving a bullet train with more energy efficient is a primary factor with including the use of lighter materials and components. To improve the traction control technology silicon carbide power converters are used. 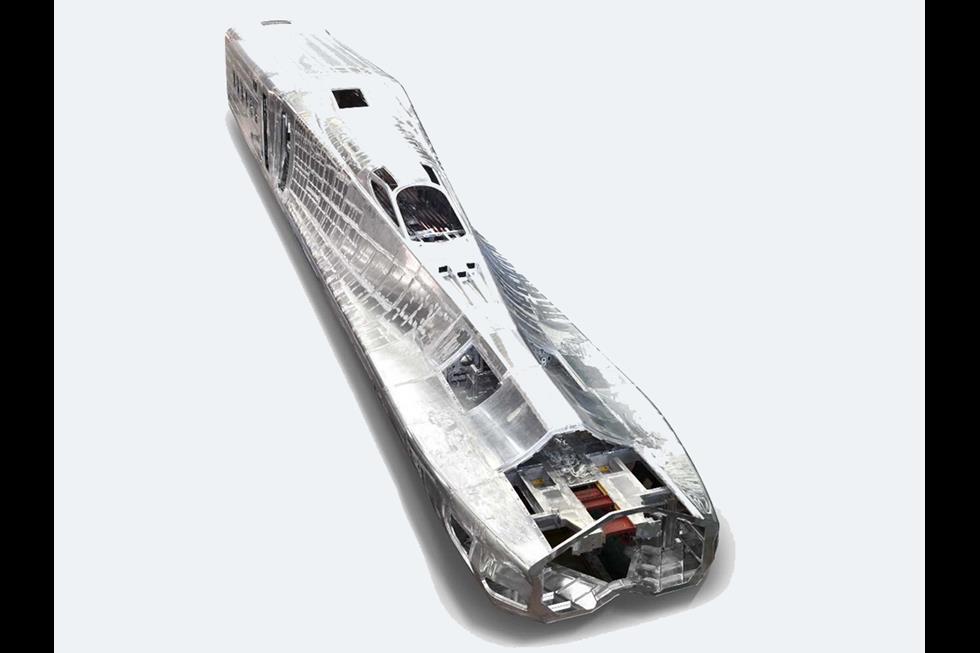 Aerodynamic drag enables the shortening of the emergency braking distance during the time of earthquake. The plate units are stored flat when the train is running. At the time of activation, the plates are shifted to the vertical position on the train roof to increase aerodynamic drag and decelerates the train. 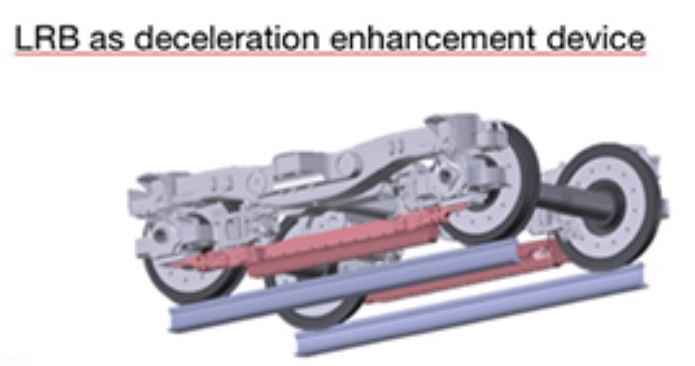 In the event of an earthquake, coils on the bogies the rails. By creating an electromagnetic force between the coils and the rails, the deceleration of the train is increased. 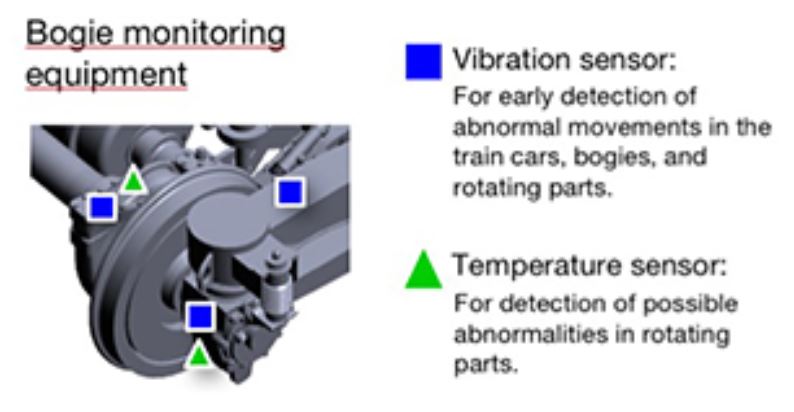 A device that monitors the whole bogie is installed with the aim of creating a "smart bogie" that is capable of making independent judgements on safety. The installation of vibration and temperature sensors on parts such as the car body, bogie and axle box ensures a higher degree of safety by allowing autonomous judgements to be made regarding the state of the bogie. This also helps improve transportation quality by predicting and preventing breakdowns. 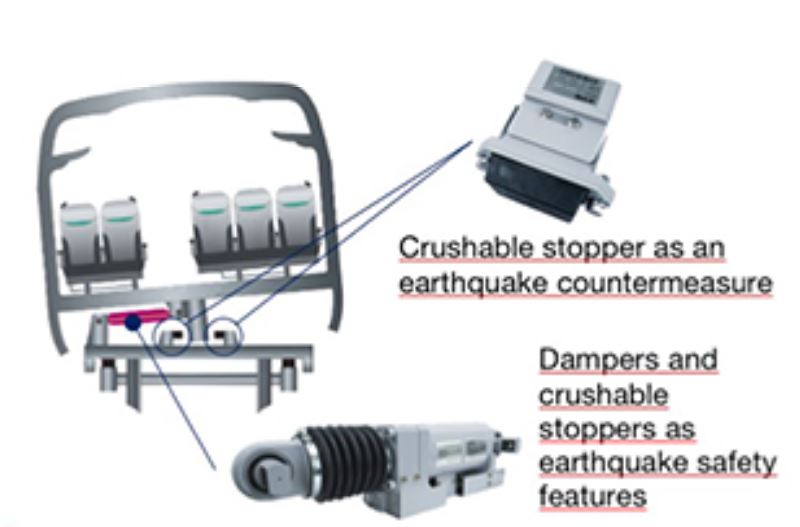 Crushable stoppers and dampers as an earthquake countermeasures

Dampers exert a strong damping to restrain shaking of the train. Upon experiencing a severe seismic shock, the earthquake-safety stoppers are crushed ("crushable stoppers"). As a result, the space between the center pin and stopper spreads to mitigate the shock between the body and bogie and to prevent high lateral pressure from occurring between the wheel and rail.

Snow adhesion is a major problem for the Shinkansen trains to operate at areas of heavy snow. To reduce snow adhesion on bogies and surrounding components, this structure alters the aerodynamics of the car to reduce the volume of snow coming into contact with these areas.

On curves at higher speeds, a certain degree of body tilt is provided by the active suspensions. 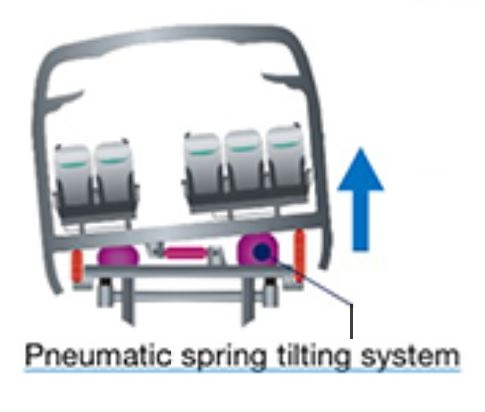 To reduce vertical vibration, tremble protection management device and enhanced dampers are incorporated. So that even at high speeds ride comfort will be improved. 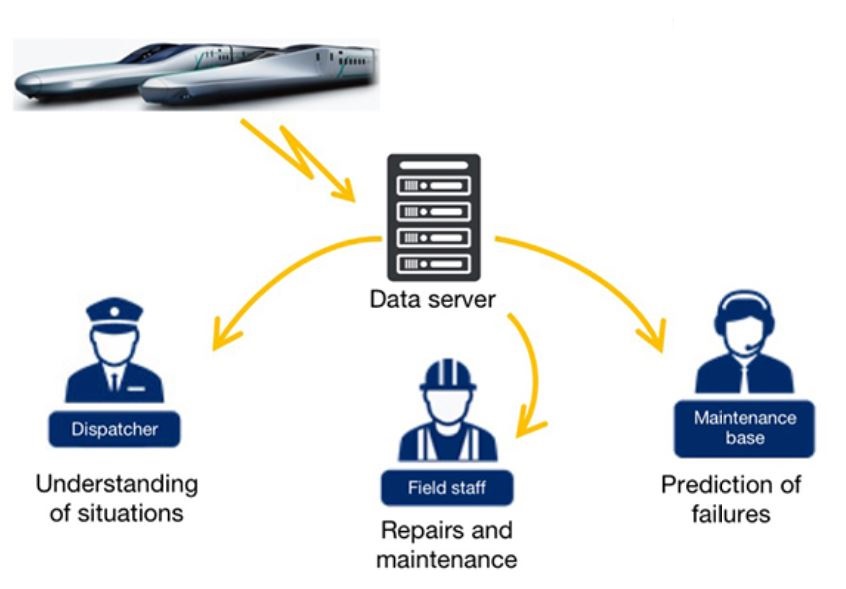 To boot, on-board instrumentation via associate in nursing on-board info network also can be monitored. Gathered knowledge is to check functions and conditions, predict the longevity or failure of devices, and find abnormalities. For safer and a lot of stable transport by CBM, knowledge are collected with virtually continuous frequency. By gathering measure knowledge of track irregularity still as vibration of train cars and bogies beneath high-speed conditions, a system to manage track conditions a lot of effectively and supply a ride quality appropriate to higher speeds are beneath development.

Can’t wait to see this “Dotless Cheetah” on the rails.